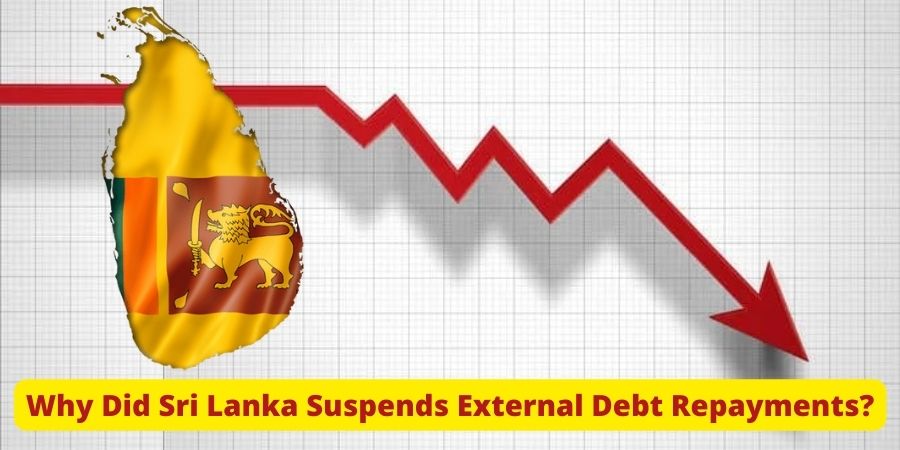 To describe the current situation of  Sri Lanks, in brief, the country has power cuts of 13 hours long, a shortage of food, and even medicines. They do have foreign exchange reserves but they can’t be isolated as the country is using them to import the essentials like fuel.

As the worst economic crisis in Sri Lanka continues, doctors have raised an alarm over the death toll in the country. #SriLankaEconomicCrisishttps://t.co/TVDlR8bkET

On Tuesday (12th April 2022), Sri Lanka’s Central Bank announced the decision of suspending the external debt repayments as it had become challenging and impossible as of now.

However, everyone’s wondering how come Sri Lanka is in the position of suspending external debt repayment!

Well, the nation’s reserves have slumped down more than  ⅔rd in the past two years. And COVID-19 made things worse by hitting the tourism-depended economy. All this together exposed the government’s debt-fuelled spending.

To add up the hard times, the Russia Ukraine war hit on the economy also affected the fiscal position of Sri Lanka.

Officials said the impact of the #Covid19 #pandemic and the #RussiaUkrainewar made it "impossible" for the island nation to pay its creditors. #SriLanka https://t.co/cKHs86IHXf

The current president of Sri Lanka Gotabaya Rajapaksa and his brother, Prime Minister Mahinda Rajapaksa has announced their resignation, following the news. They both have been defiant despite the ongoing protests for inflation of more than 20% in the country.

“The government intends to pursue its discussions with the IMF as expeditiously as possible with a view to formulating and presenting to the country’s creditors a comprehensive plan for restoring Sri Lanka’s external public debt to a fully sustainable position,” the ministry said.

#SriLanka's Finance Ministry said the govt has decided to suspend normal debt servicing of all affected debts for an interim period till it puts together an orderly and consensual restructuring programme supported by the #IMF. #SriLankaCrisis https://t.co/fUbgpf3mXP

Apart from that, they have turned their hands toward India and China for help to fulfill the gap of shortages in foods and medicines.

The foreign ministry representative said in a briefing on Tuesday, “China has been doing its utmost to assist in the socio-economic development of Sri Lanka, and will continue to do so going forward.”

With the situation being out-of-control, it was essential to suspend the debt repayment temporarily to meet the requirement of 22 million people.

This decision on repayment was taken in the good faith and also to emphasize that this country has never defaulted on its debt payments.

Stay tuned to BlackBuck Magazine for information on the economy and all the other industries affecting it!