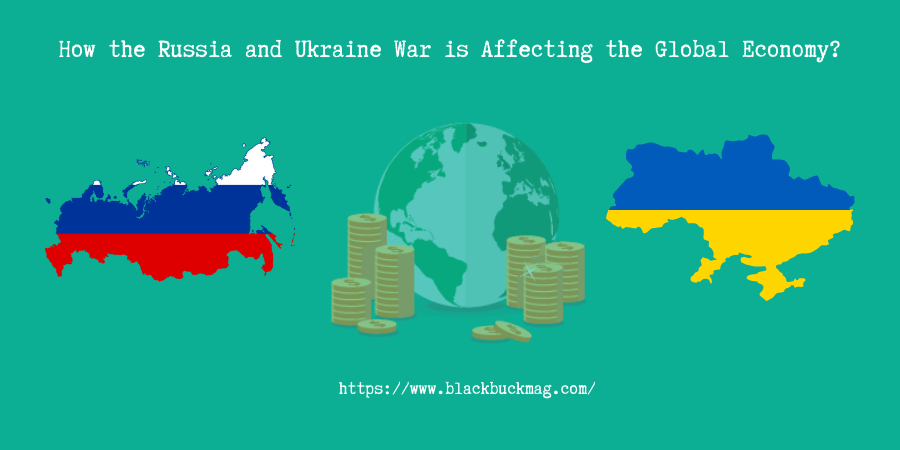 The Russian and Ukraine war has affected people in all ways, physically, mentally, emotionally, and economically. You would have read that market is going to suffer a hard hit because of the war situation. The common question in people’s minds is why is war affecting the economy and business around the world.

To get an answer, you will have to understand how war affects the economy. As soon as you understand that all your doubts will be cleared.

Apart from the loss of human life, there’s damage to infrastructure, working population, rise in inflation, shortages, debt, uncertainty, and disruption in normal economical activities. All these together fluctuate the market and there’s an adverse effect on the global economy.

Let’s understand this thing by looking at a practical example. In this article, we will cover the effects of war on the economy of the US, UK, Russia, Ukraine, and India. Along with that, we will also see the impact of war on the stock market.

However, the very first question is why is war happening.

Why is the Russia Ukraine war happening?

The normal reasons behind the war between any nation can be economic gain, nationalism, civil war, territorial gain, religion, and political revolution. So, which of these reasons defines Russia’s aggression against Ukraine?

Well, there are many speculations on the internet, some state Ukraine is just a pawn in this war, some state it is the result of pro-Russian protests. There’s no exact reason revealed behind Russia’s attack on Ukraine.

You can read more about that here on BBC News. Now, let’s focus on our actual topic.

How will the Russia Ukraine war affect the US economy?

Not only the US economy, but the war between Russia and Ukraine will affect the global economy as well. The reason behind that is they are the exporters of oil, natural gas, and other industrial commodities. Let’s see the price changes in the following commodities in the USA.

The gas prices are soaring high after Russia’s invasion of Ukraine. It is estimated that it will reach the national high average pricing of $4 per gallon by Monday (7th March 2022). The same is with crude oil prices, currently, it is $106 per barrel and it is expected to hike up to $120 per barrel. The last time prices went this high was Hurricane Katrina.

Apart from gas and oil, Russia and Ukraine both are heavy exporters of Wheat. Besides that, it also produces low-cost and high-quality fertilizers, hence farmers are expecting a hike in fertilizers as well.

All in all this Russia Ukraine war is going to affect both the nation and its citizens. Politicians stated they are happy to pay the price of supporting Ukraine. The USA government is going to suffer most, as they along with Europe have sanctioned Russia for so many things as soon as it declared war against Ukraine.

We’re building the economy from the bottom up and the middle out – and getting America back to work. pic.twitter.com/zvtHjo0Xy7

How will the Russia Ukraine war affect the UK economy?

The most adversely affected country is the UK in Europe. 86% of houses in the UK rely on the gas imported from Russia. The government of the UK has estimated that there will be a hike in the cost of living, due to the Russia Ukraine War.

The oil prices in the UK have surpassed £100, which is already the highest of the last 7 years. There will be 8% inflation by the end of April Month. The energy regulator Ofgem has raised its price cap from April by £693. So, the ones with default energy tariffs will pay £1,971 from April 1st.

Russia and Ukraine are often termed as “the Breadbasket of Europe,” as the fertilizers are imported from them for the production of wheat. And as there will be a hike in the prices of fertilizers, it will affect the cost of wheat and ultimately the cost of living of UK people.

As if something was remaining for the watery eyes, the interest rates are also going to see a hike. It is said that it will go up to 7% this year and saving rates will decrease. You can say the Russia-Ukraine war has brought the dark times of the European people.

You can read more about it on BBC.

How will the Russia Ukraine war affect Russia’s Economy?

If you think this war is only going to affect the USA, UK, India, and other nationals, you are wrong. The most hard-hit countries will be Russia and Ukraine itself. How? Let’s see.

You would have heard about the sanctions made towards Russia. Yes, that’s the reason it will see the most adverse effect of the war it started. The biggest sanction ramped is against the Central Bank of Russia [CBR], which will play a crucial role in its domestic foreign exchange market.

Freezing the CBR’s assets and accounts in the G7 countries means that it is left with gold reserves and renminbi reserves worth $127bn and $70bn in Russia respectively. However, they are useless to keep the domestic foreign exchange market rate stable.

The selling rate of dollars in banks’ exchange offices had risen by at least 45 percent as compared to the Friday, on the day of declaration. The devaluation of the rouble will increase consumer inflation by 4 to 5%. How?

As it will create problems in imports and uncertainty in the market. That will again undermine the business’s desire to take risks and there will be lower supply and higher food prices. The devaluation of the rouble will create disruptions in the payment system which will lead to disruptions in the supply of imported goods to Russia. And altogether will push the inflation higher.

The sanctions on CBR by western countries will also affect the SWIFT bank and foreign debts. Apart from that, the sanctions are levied on technology and Aviation as well. Upon request, Apple Inc. has also declared that it will stop selling its products in Russia. The 40% of aircraft in the Russian fleet are European-made Airbus, which carries 41% of their passengers. Hence, the sanctions will affect the aviation industry as well.

Read more about that on Aljazeera, where Sergey Aleksashenko (Former deputy minister of finance of Russia) has penned his opinions.

How will the Russia Ukraine war affect India’s economy?

Being a developing nation, India will certainly have an adverse effect on its economy, due to fluctuation in the global economy. Also, it has hurt the sentiments of many by abstaining from the NATO votings. So, let’s see the effect of the Russia Ukraine war on the economy of India.

Due to sanctions rammed on Russia, the Indian and Russian trade is also facing issues. The sanction imposed by Europe will affect the regular trade of Tea between India and Russia. The conflict between Russia and Ukraine has raised the prices of crude oil and it will stay the same till mid-term, i.e, $100 per barrel.

India imports 85% of the crude oil used in the country. The prices of oil won’t be affected due to sanctions as the Indian supply route is from the Middle East, Africa, and North America, which still remain untouched by the conflicts. They will continue to supply the gas and oil as normal. However, the prices will be affected due to the inflation posed by the war.

Of all, FMCG companies will be impacted and put under pressure to maintain the margins. The major inflation will be seen in home appliances, beauty products, and biscuits. Along with that, it will also impact industries dealing with soaps, detergents, and distribution & packaging costs. Why? As their key ingredients are derived from crude oil only.

Another impact is on the edible oil – sunflower. The majority of sunflower oil is imported from Ukraine. As it is hit with war, the prices of Sunflower oil are rising.

There will be a hike in real estate industries as well. How? Due to the rise in fuel prices, the cost of raw materials is also impacted. And hence, the real estate market will also see inflation. The major defeat of India is the depreciation of the rupee against the USD.

The stock market of India is unstable at the moment, but the expert states that it is the right time to invest and build wealth.

“We are in a structural bull market like 2003-2007 and there were 3 corrections of more than 30% in the last bull run. We are seeing the first meaningful correction in the market and long-term investors should not panic by this correction because it is just taking out weak hands before resuming its up move. This correction will provide a good buying opportunity where major wealth can be created in the next 3-5 years,” said Santosh Meena, Head of Research, Swastika Investment Ltd.

Ream more about war impact on Times of India [TOI]

This isn’t the end. We will be updating the article regularly, as we get hands-on with the current situation. You might be thinking why we didn’t add the impact of war on Ukraine, the primary reason is it is beyond the words that can describe. It is obvious that Ukraine will have to start from zero once all this is completed. We don’t even know whether it will be Ukraine or not. But let’s hope Russia stops its aggression and let the people of Ukraine enjoy their freedom.

We need to understand that war is not the solution, it is the destruction of the nation. It affects everyone physically, mentally, emotionally, and economically.

Stay tuned to BlackBuck Magazine to get updates on How-Tos, business, technology, lifestyle, and much more. Also, don’t forget to follow us on social media platforms.